The Ksyrium Pro SL is the result of over 15 years’ wheel development.

Breaking the mould
When it was first introduced in 1999, Ksyrium totally broke the mould of wheel build (traditionally 32 thin steel spokes with tiny nipples, traditional drilling and lacing). It drastically improved the ride quality of a wheel and a new generation of wheel system was born that would set the industry benchmark in the 21st century. The secret was finding the sweet spot for wheel performance as it became lighter, stiffer, more comfortable and at the same time more reliable than ever. The key technological developments that enabled this became character traits that still define Ksyrium today.

Revolutionary Fore drilling
Probably the greatest Ksyrium innovation is the revolutionary spoke-rim interface, taken directly from the aeronautics industry, called Fore drilling. Here the rim isn’t actually drilled. Instead its lower bridge is heated, then pushed on the inside forming a channel on which a thread is formed. The nipples (integrated into the spoke) are then directly threaded on the rim. The thread is much larger and deeper than on a traditional steel spoke and nipple, creating the strongest possible connection between the rim and the spoke. As the upper bridge of the rim remains intact (no drilling) the stiffness of the rim increases by about 20% without creating the weak point generated by traditional drilling. On top of that, no rim tape is needed, saving another 40g on the wheelset at the most important point of the bike.

Zicral alloy spokes
Ksyrium Pro SL also uses super aero and light Zicral alloy spokes that are stiffer, stronger and lighter than the stainless steel versions used on all bicycle wheels since the end of the 19th century. Isopulse lacing pattern was commonly accepted that spokes needed to be crossed at least on the drive side to spread pedaling torque. Mavic went against this belief and created the Isopulse lacing pattern where the spokes are radially laced on the drive side and crossed on the opposite side. This means the pedaling torque is transferred through the hub shell to the non-drive side spokes giving a much more balanced spoke tension (60/40 instead of 80/20 in some instances), which results in a more stable wheel, maintaining its lateral stiffness even when a high lateral stress is applied (heavy acceleration or climbing out of the saddle, for example).

ISM technology
Mavic patented their ISM technology (Inter Spoke Milling) which gave an extra 10% weight saving. The weight is saved precisely where the rim suffers very little stress (in between each spoke), which maintains a very high strength level. Prototypes of this new wheel went on to win two Tour de France! Year after year, Mavic have refined their Ksyrium technology and expanded its features (ISM3D, asymmetrical rims, double butted spokes, front carbon hubs…). So Ksyrium is constantly getting lighter, stiffer and stronger. Ksyrium Pro SL debuted a brand new rim, based on new rim weight saving technology: ISM4D (Inter Spoke Milling 4 Dimensions). With ISM4D, each part of the rim is precisely machined leaving just the material needed to guarantee the stiffness and strength of the wheel. The result is a superlight rim at just 370g that also saves you 4 watts thanks to its smoother aerodynamic shape. The total wheel weight remains at an impressively low 1395g.

Matching Yksion Pro tyres
The rim is matched with Mavic’s Yksion Pro tyres that offer a supple 127 TPI casing, Kevlar beads, a well-balanced rubber compound that offers the best blend of grip and rolling resistance and a weight of only 195g in 23mm and 210g in 25mm. Ksyrium Pro SL is available with 23mm or 25mm tyres. 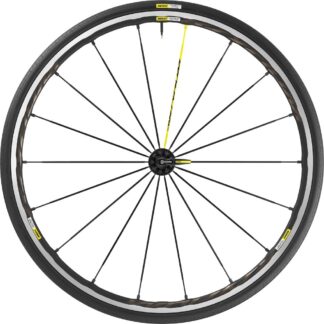